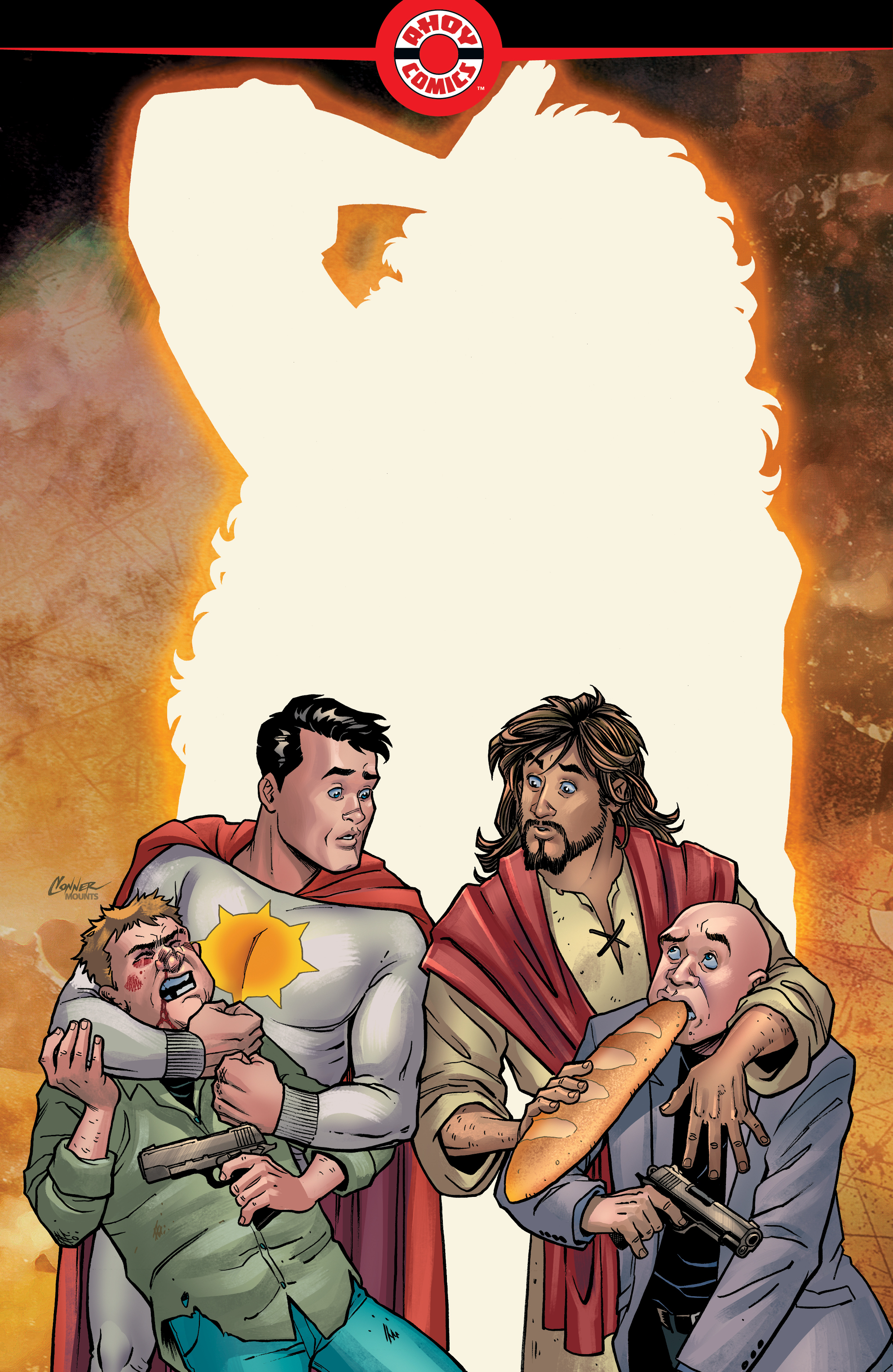 (March 12, 2019) SECOND COMING, the controversial, satirical comic book series in which Jesus Christ resumes His Holy Mission, will be published by AHOY Comics this summer. In the series created by New York Times bestselling writer Mark Russell and acclaimed artist Richard Pace, God commands Earth’s mightiest superhero, Sunstar, to accept Jesus Christ as his roommate and teach him how to use His power His power in a... more powerful way. Jesus, shocked at the way humans have twisted his message over two millennia, vows to straighten it out. The creator owned comic book series was originally scheduled to be published by DC Comics’ Vertigo imprint on March 6, but in the wake of a widespread controversy following an online petition by CitizenGo, the creators asked DC Comics to revert the publishing rights back to them. On July 10, 2019, AHOY Comics will publish the debut issue of the 6-part SECOND COMING comic book series, featuring covers by the award-winning artist Amanda Conner.

Writer Mark Russell has previously written two acclaimed prose books about the Bible: the national bestselling God Is Disappointed in You and its follow up Apocrypha Now, both illustrated by Shannon Wheeler and published by Top Shelf Productions. The SECOND COMING series is Mark Russell’s first comic book series about God and religion. “Having grown up in church, the teachings of Christ seemed like a good jumping off point to imagine other ways of approaching the world, and how those teachings have been twisted to serve the very institutions they were supposed to undermine,” said Russell. “I wanted to make SECOND COMING to re-examine the embedded assumption in all our superhero comics, laws, and institutions of civilization that physical force is the only thing that changes the world.  That maybe the good guys are not good simply because they're better at violence than the bad guys, but maybe because they can imagine ways for people to get along other than bribery and revenge. I suppose SECOND COMING is, like all my comics, ultimately about how our institutions have failed us.”

“We want to thank DC Comics for letting us find the right home for SECOND COMING,” said co-creator and artist Richard Pace. “After all the manufactured outrage, we’re looking forward to seeing what the intended audience for this book thinks when they read the first issue this summer.”

AHOY Comics launched last fall with four acclaimed comic book magazine titles featuring full length comic book stories, poetry, prose fiction, and cartoons from more than seventy artists and writers. The independent, Syracuse-based company is the brainchild of Publisher Hart Seely, an award-winning reporter whose humor and satire has appeared in The New York Times and on National Public Radio. “The goal of AHOY Comics is not just to publish the greatest comic book magazines in the world, but the greatest funny books you can find,” said Seely. “And the SECOND COMING series sits perfectly next to the superhero parody THE WRONG EARTH, the religious satire HIGH HEAVEN, the sci fi spoof CAPTAIN GINGER, and the over-the-topic literary antics of our anthology series EDGAR ALLAN POE’S SNIFTER OF TERROR.”

“We understand that the publication of SECOND COMING will get a strong reaction and we support Mark and Richard's satiric vision," said Tom Peyer, AHOY Comics Editor-in-Chief, who was one of the original editors for Vertigo Comics when the Mature Readers imprint was founded at DC Comics by Karen Berger. “There are going to be people who don't want to read SECOND COMING, and that's fine. It's not for everyone. But I don't think it should be controversial to maintain that the rest of us have every right to enjoy it."

Joining the creative team is colorist Andy Troy, who will color sequences in the comic not colored by Pace. More details about SECOND COMING, including a cover artist, will be released closer to the series’ debut.

“As a former newspaper man, I expect that there will be some headlines saying that this is the second coming of THE SECOND COMING” said AHOY Comics Publisher Hart Seely. “It’s a fun headline, but it only hints at the compelling story that will be told. We’re not chasing headlines by publishing SECOND COMING. We’re publishing a thoughtful satire that examines spirituality and religion in the contemporary world. And the jokes are damn good.”

Mark Russell is the author of two books about the Bible, God Is Disappointed in You and Apocrypha Now. He is also the Eisner-nominated comic book writer behind such titles as THE FLINTSTONES, EXIT STAGE LEFT: THE SNAGGLEPUS CHRONICLES, RED SONJA, and more.

Artist and art teacher Richard Pace has applied his talents to numerous industries including games and television, but comics remains his greatest love. Hailing from Canada, Richard has contributed to such auspicious DC projects as Mike Mignola’s BATMAN: THE DOOM THAT CAME TO GOTHAM and TRANSMETROPOLITAN: ALL OVER THE WORLD with Warren Ellis. Most recently, Richard provided memorably haunting covers for Vertigo’s IMAGINARY FIENDS.

Amanda Conner began her professional art career  as an illustrator for New York City ad agencies.  However, her love of comic books and cartooning soon led her to the comics world where she initially found work at companies such as Archie, Marvel and Claypool Comics.   Since then she has worked on a number of high profile projects spanning a variety of genres.  Her works include Vampirella, Painkiller Jane, as well as creator owned projects such as Gatecrasher (with co-creators Jimmy Palmiotti and Mark Waid) and The Pro (with co-creators Jimmy Palmiotti and Garth Ennis).  Her work for DC Comics includes CODENAME KNOCKOUT, BIRDS OF PREY, TERRA, a well regarded run on POWER GIRL and BEFORE WATCHMEN: SILK SPECTRE. Amanda, along with her artist/writer/fhusband Jimmy Palmiotti, and writer Justin Gray currently work together via PaperFilms, a multimedia entertainment studio engaged in screenwriting, art production and development.

Andy Troy has colored for Marvel Comics, DC Comics, Extreme Studios, and others, working on such characters as Spawn, Batman, Captain America and Iron Fist. He lives and works in Hunsville, AL, where he used to play in the metal band Diamond White.