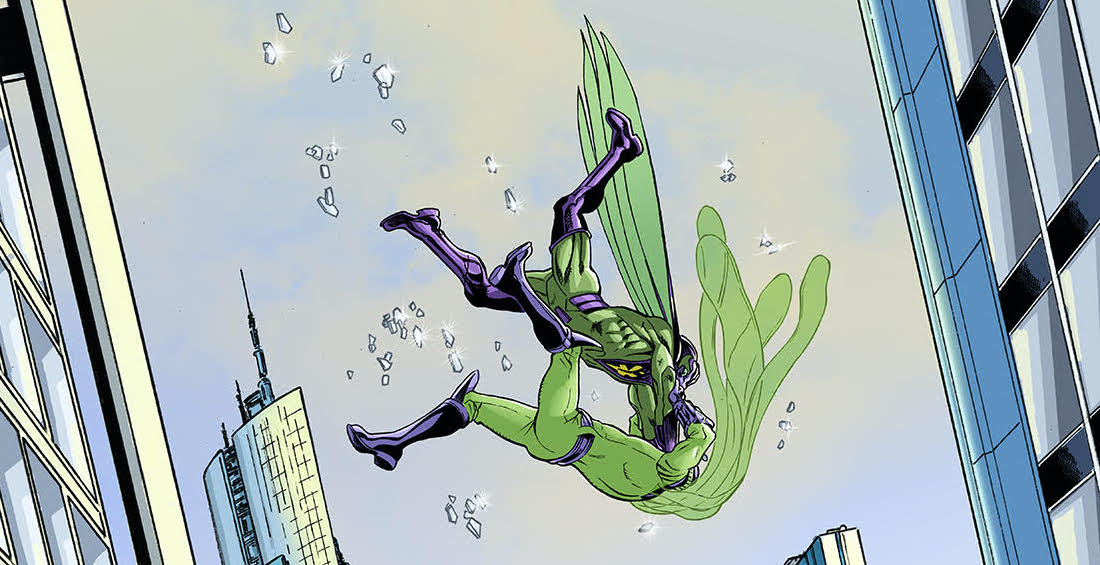 “A great examination of both the lighter fun superheroes and also the grim and gritty types... This is a top notch series that really deserves to be getting more attention than it does. … Jamal Igle is doing career defining art here."—COMIC BOOK DISPATCH

“A simple concept, but it’s one that hooks you in rather effortlessly… Writer Tom Peyer is able to write a sequel comic that’s every bit as accessible to new readers... Peyer gives each version of Dragonfly (Man) a unique voice, playing into the dichotomy of their switched roles with a level of dry humour that sings to me.”—GRAPHIC POLICY

“Wrong Earth has been the quintessential AHOY Comics book — a clever and fearless satire of some of the comics industry’s long-time sacred cows. Now, the book is back with what it essentially its third volume of issues, and it remains as sharp as it has been from its start.”—COMICS BOOKCASE

“The team of Peyer, Igle, Castro, Troy, and Steen again execute every detail that made The Wrong Earth spectacular, and emerge with a first issue in this second arc that nearly supersedes its predecessor. … Peyer and Igle keep their cast of key characters small while dishing out some of the funniest villains to revitalize the antagonist character tropes in superhero comics. Night and Day #1 employs satire, clandestine foreshadowing, and scintillating art to explore the dichotomy of two heroes grappling with the reality of existence on the wrong earths.”—COMIC BOOK YETI

“Utterly brilliant… superb… stupendous... One of the best books you’ll read... Ahoy Comics really knows how to bring you the best entertainment you are going to find.”—READING WITH A FLIGHT RING

"As Igle dazzles the eye with his beautifully detailed storytelling, Peyer impresses with his dynamic characterization. Together with embellisher par excellence Juan Castro, these three are a comic book dream team reunited and have created a series that is in itself a dream come true for longtime comics fans and new readers everywhere.”—TRIPWIRE MAGAZINE

“An amazing read…. What sounds like a Saturday Night Live sketch – throwing Adam West into the new Batman movie – instead of a joke is an examination of what makes a hero.”—THE MASKED LIBRARY

“We finally get the meeting between Dragonfly and Dragonflyman... These two are becoming the ultimate odd couple... Even if you are a long time fan or someone who just read their first book, The Wrong Earth has taken a great concept and evolved it slowly but surely to make it one of the most consistent ongoing titles today.”—GEEK CAST RADIO

Home It's the Right Time for the Wrong Earth: Night and Day!