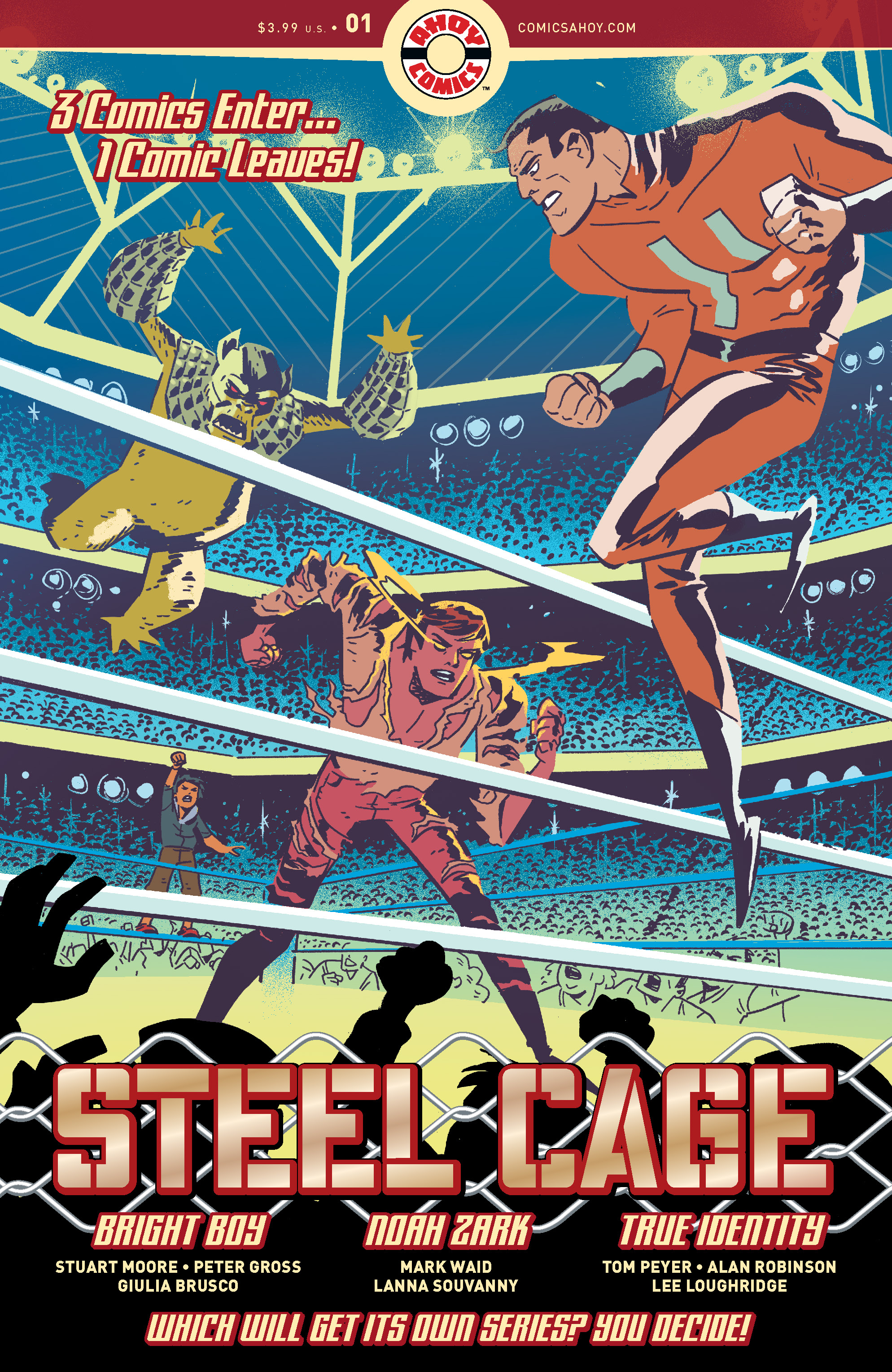 Fan Voting Will Determine What Comic Book Series Is Published

June 24, 2019) AHOY Comics—the startup publisher that pledged for readers to “expect more” from its comic book magazines—is inviting readers to vote on what comic should receive its own series. On Wednesday, June 26 AHOY Comics will publish STEEL CAGE #1, a one shot comic book anthology featuring three dazzling short “pilot” stories from all star creative teams. Fans can vote on which story continues at the AHOY Comics website: https://comicsahoy.com/vote and the outcome of the vote will determine what comic book series is published.

The competing stories in the STEEL CAGE One Shot are:

Competition between the comic book veterans is fierce.

“I mean, let's get real,” said Stuart Moore, the writer and co-creator of CAPTAIN GINGER and BRONZE AGE BOOGIE. “When you come home from a hard day at the Soylent Green plant and rip open your comics bundle, what do you want to read about? A kid in a zoo? A SUPERHERO? No—you want to read about the smartest guy in the world! Bright Boy for the win!”

Tom Peyer, AHOY Comics’ Editor-in-Chief and the writer of its acclaimed comics THE WRONG EARTH, HASHTAG DANGER and HIGH HEAVEN, said, ““When I read Bright Boy or Noah Zark—and I've been reading both stories obsessively—my head is tilted as if to say, 'what an adorable, childlike attempt to prevent the inevitable victory of Alan's and my True Identity.' And then I shed a tear, because there's something deeply sad about their efforts.”

Mark Waid, the New York Times bestselling writer of beloved comics including KINGDOM COME and IRREDEEMABLE, is contributing his first story for AHOY Comics in STEEL CAGE. Waid said, “As I look down from high above the Mount Olympus of legendary comic book writers, it amuses me to see the flailing True Identity and Bright Boy teams wander aimlessly in search of some sort, any sort. of ladder with which to ascend by standing on the backs of their adorable ‘creations.’ Perhaps there will come a day when they find themselves privileged enough to sit before Lanna and I and bask in our boundless glory. Until then, we shall simply nibble on our ambrosia and laugh.”

AHOY Comics is led by Publisher Hart Seely, an award-winning reporter whose humor and satire has appeared in The New York Times and on National Public Radio. “STEEL CAGE just might be the greatest moment of fan participation since fans called a 1-900 number and voted for a teenage sidekick to die,” Seely said.

AHOY Comics debuted in the fall of 2018 with the bold promise for readers to expect more from its line up of comic book magazines, featuring comic book stories, poetry, prose fiction, and cartoons. The independent, Syracuse-based company is the brainchild of Publisher Hart Seely, an award-winning reporter whose humor and satire has appeared in The New York Times and on National Public Radio. AHOY’s Editor-in-Chief Tom Peyer is committed to publishing comics with a (dark) sense of humor with titles like the superhero parody THE WRONG EARTH, the religious satire HIGH HEAVEN, the sci fi spoof CAPTAIN GINGER, and the anthology series EDGAR ALLAN POE’S SNIFTER OF TERROR. This summer, the company will publish the highly anticipated SECOND COMING, the satirical comic book series by Mark Russell and Richard Pace in which Jesus Christ resumes His Holy Mission.