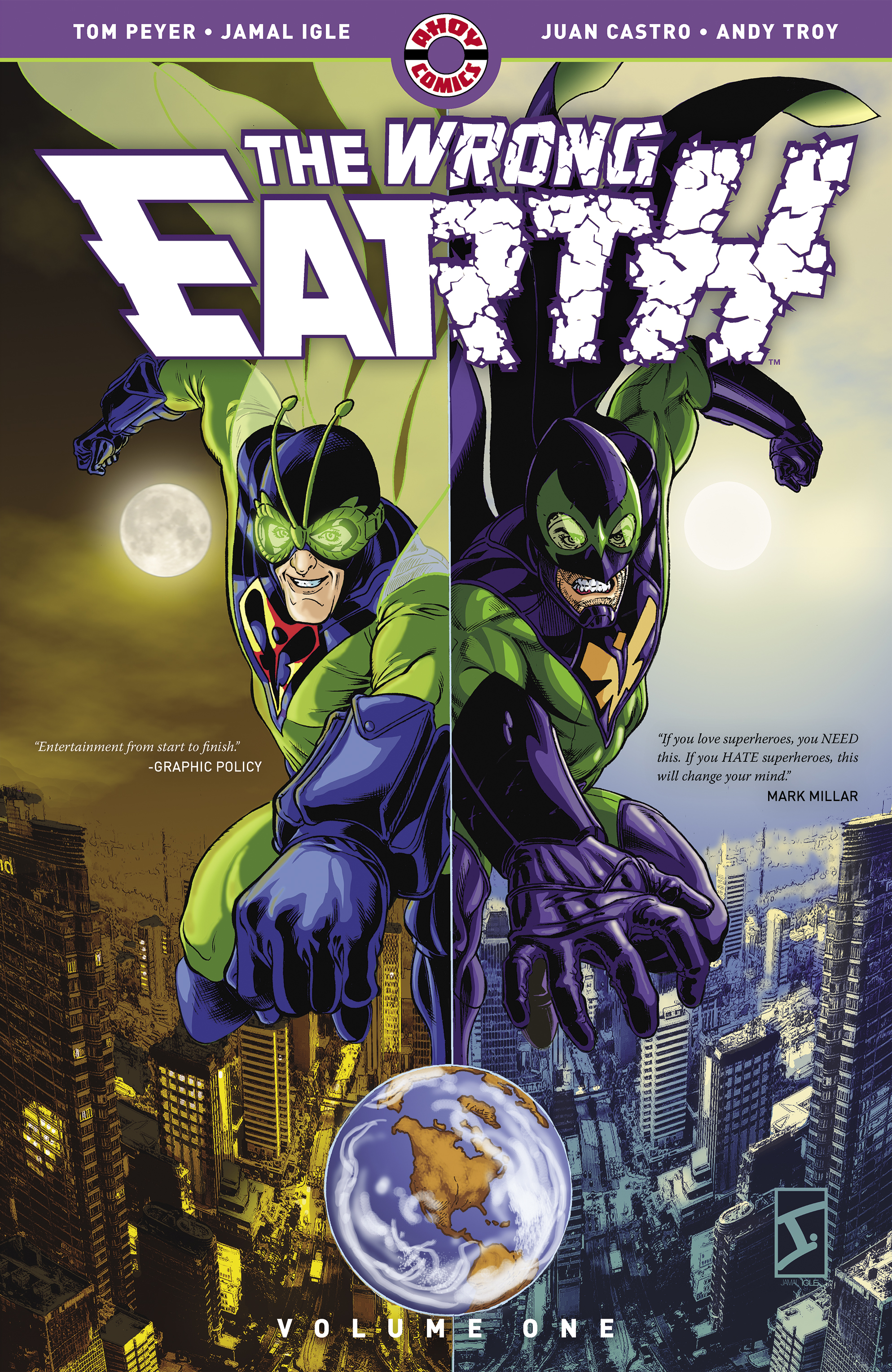 Whether you live on Earth-Alpha or Earth-Omega, it seems like everyone's talking about THE WRONG EARTH by writer Tom Peyer, artists Jamal Igle and Juan Castro, colorist Andy Troy and letterer Rob Steen. The acclaimed trade paperback is on sale in comic shops now and will be available in bookstores on May 14. Here’s what folks are saying:

“This series contains more entertainment than most contemporary comics and serves to remind readers of what they were always intended to be: fun.” — PUBLISHERS WEEKLY

“Fun take on the classic and modern superhero.” — GRAPHIC POLICY

“Makes good on the original promise of AHOY Comics to deliver more, and more diverse content for your buck.” — COMICON

“After reading The Wrong Earth (walk through a Hands Off mirror if you have to and get to an Earth with a copy to spare), there is no doubt you can #expectmore when it comes to Ahoy!” ―  Dave Dellecesse

“There’s so much right about THE WRONG EARTH.” ― GEEK DAD

“Peyer and Igle knock this one out of the park.” — AiPT COMICS

“A fun and funny mash of silver age goofiness and grim & gritty superheroics. Such a fun idea and well done.” — John Layman

"This is a lot of quality entertainment packed into a single issue. If it sets the standard for future issues, it’s a steal given the cover price." — DOOM ROCKET

“You had me at numbered pages.” — Vinny Bellizia

“Jamal Igle captures both these worlds and its characters in wonderful detail….. Whether it be bewildering shock, a cheesy grin, hate-filled smirk or an insane smile, all of these expressions are excellent and really help to translate the score of emotions that are flying throughout this issue. The Wrong Earth #1 is an entertaining and compelling story, and this coupled with the additional content makes for some great reading.”  — IMPULSE GAMER

“Beautifully rendered by Jamal Igle, whose credits include Supergirl and Firestorm. Andy Troy’s colors move you between the brightness of Earth-Alpha to the perpetual night of Earth-Omega.” — BAM! SMACK! POW!

“I knew this was going to be good when I saw Peyer and Igle on the credits, but now I really want to see how it all plays out.” ― Jeff Parker

“The magic comes in how it unfolds… a great companion piece to Mark Waid’s “Irredeemable.” — PORTLAND OREGONIAN

“It’s appropriate that The Wrong Earth — the first series offered by AHOY Comics —  involves parallel worlds, as the publisher’s delightful output seems like an artifact from a parallel universe. Although AHOY’s format is unique in our universe, I imagine similar works exist on other Earths where the dense pages and eclectic content of Golden Age comic books never went out of fashion. On such worlds, Gore Vidal’s illustrated prose novel Rasputin is serialized alongside the wordless gag cartoons of Andy Warhol and the continuing superhero adventures of The Black Terror, all inside comic books that are read at both cosmopolitan salons and seedy gas stations. Given the apparent cross-dimensional inspiration behind AHOY Comics, I theorize that the publisher’s founders chose the name “AHOY” after reading Truman Capote’s poignant short prose story “AHOY!” (published in the comic Pirate Treasure #78 on Earth-876B), in which a minister’s virtuous daughter becomes a lusty pirate queen after a series of farcical adventures.”  — Reed Beebe

“Peyer’s writing embraces classic superhero storytelling really beautifully while also parodying it and it makes for a hell of a comic book reading experience. Jamal Igle, the artist for the series, flawlessly compliments Peyer’s vintage styled writing with his gorgeous artwork that is both extraordinary and classic.”  — COMICS THE GATHERING

“I haven’t felt this excited about a new series in a long time. While this showcases new and old storytelling ideas there is still something about it that promises hope which is something that has been missing far too long. This is a combination of amazing storytellers and an amazing story concept coming together to bring us to a place where we can have fun and find joy in comics again.”  — READING WITH A FLIGHT RING

“The idea behind this book is simply brilliant!” ― COMIC CRUSADERS

“THE WRONG EARTH is far more than a one-note gag--Tom and Jamal have made a surprisingly deep exploration and commentary on where this medium has been, how it got to where it is, and where it can go.”―Mark Waid