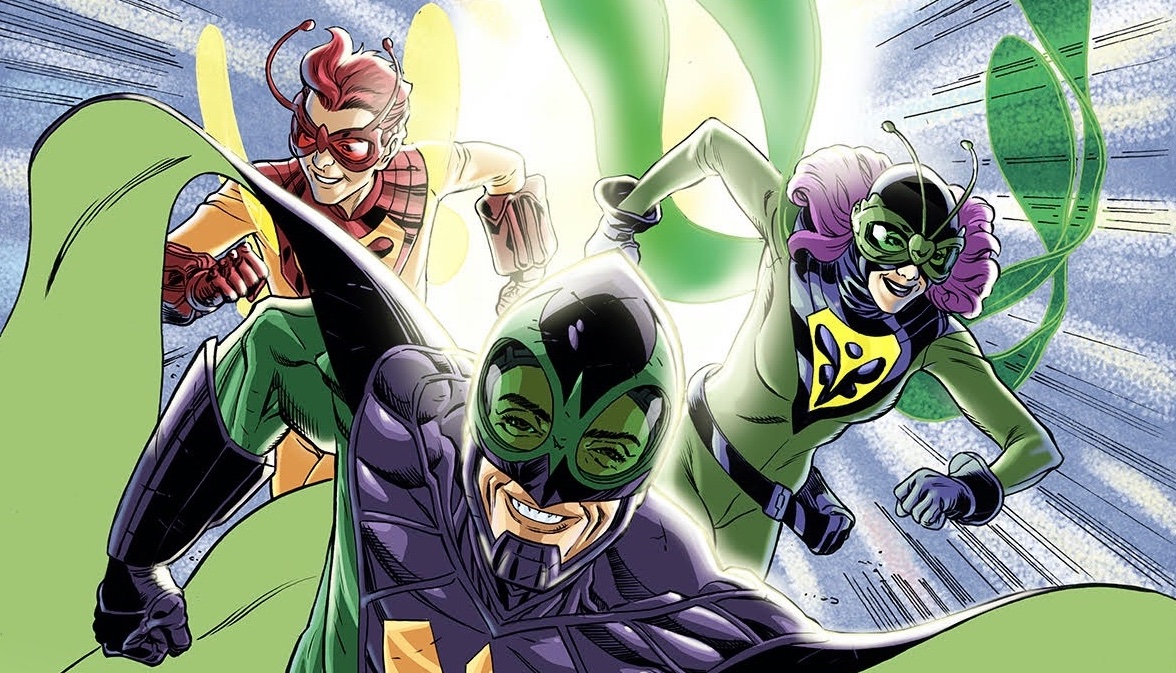 With Covers by THE WRONG EARTH Co-Creator Jamal Igle

(December 9, 2021) Bestselling writers Gail Simone (Red Sonja) and Mark Waid (History of the Marvel Universe) are joining AHOY Comics Editor-in-Chief Tom Peyer, Second Coming writer Mark Russell, and Captain Ginger writer Stuart Moore to write world-shattering, money-grabbing, stand-alone THE WRONG EARTH specials for AHOY Comics. These comics will feature art by Bill Morrison, Walter Geovani, Michael Montenat, Fred Harper, Leonard Kirk, and Greg Scott, with covers by THE WRONG EARTH co-creator and artist Jamal Igle. Each special will have a variant cover by Gene Ha; there will also be  variant covers by Dan Parent, Jerry Ordway, and other artists. The multiverse-spanning monthly event will begin in March with the release of THE WRONG EARTH: TRAPPED ON TEEN PLANET #1, written by Gail Simone, with art by Bill Morrison, Walter Geovani, and Rob Lean, with colors by Andy Troy, and lettering by Rob Steen.

“Words will be written, words will be deleted, and nothing will ever be the same,” said AHOY Comics Editor-in-Chief and THE WRONG EARTH co-creator Tom Peyer. “This is Crisis on Infinite Earths, minus the line-wide consequences that made it interesting. This is Secret Wars without toys. This is the kind of epic, superheroic storytelling that publishers and CFOs love, where the tail of wealth-enhancing variant covers wags the dog of art.”

Each of THE WRONG EARTH world-shattering special event one-shots will present a stand-alone, 25-page story that expands on the multiverse first introduced in AHOY Comics’ flagship title by Peyer and Igle, wherein the campy Dragonflyman of Earth Alpha switched places with the gritty Dragonfly of Earth Omega and chaos ensued.

The first issue to hit stores, THE WRONG EARTH: TRAPPED ON TEEN PLANET #1, finds grim-and-gritty vigilante Dragonfly whisked to an Earth of teenagers, malt shops, love triangles, and nonstop jokes. Will they win him over—or will his violent methods infect their world? The issue is illustrated by Bill Morrison (The Simpsons), Walter Geovani (Red Sonja/ Tarzan), and Rob Lean (Smallville: Alien), with colors by Andy Troy, and lettering by Rob Steen. THE WRONG EARTH: TRAPPED ON TEEN PLANET #1 will feature variant covers by both Gene Ha (Wonder Woman Historia: The Amazons) and Dan Parent (Veronica). The issue marks the AHOY Comics debut of legendary writer Gail Simone.

“Tom Peyer and Jamal Igle created a clever premise with THE WRONG EARTH that is a deeply satisfying read. All it needed were more redheads,” said Simone. “Our story is about a town, a small town, and the people who live in the town, including an earnest ginger, who is sort of in love with two girls. From a distance, this town presents itself like so many other small towns all over the world: safe, decent, innocent. Get closer, though, and you start seeing the shadows, specifically the long, dark shadow of the Dragonfly.”

“There’s never been a better time to discover THE WRONG EARTH,” said Igle. “Read these fan favorite comics now, before they’re discovered by a Hollywood executive who divides fandom forever by releasing a barely coherent film, with at least two directors and four screenwriters attached.”

AHOY Comics debuted in the fall of 2018 with the bold promise for readers to expect more from its line of comic book magazines, featuring comic book stories, poetry, prose fiction, and cartoons. The independent, Syracuse-based company is the brainchild of publisher Hart Seely, an award-winning reporter whose humor and satire has appeared in The New York Times and on National Public Radio. AHOY’s editor-in-chief Tom Peyer is committed to publishing comics with a (dark) sense of humor.

Home THE WRONG EARTH Returns for a World-Shattering Event!