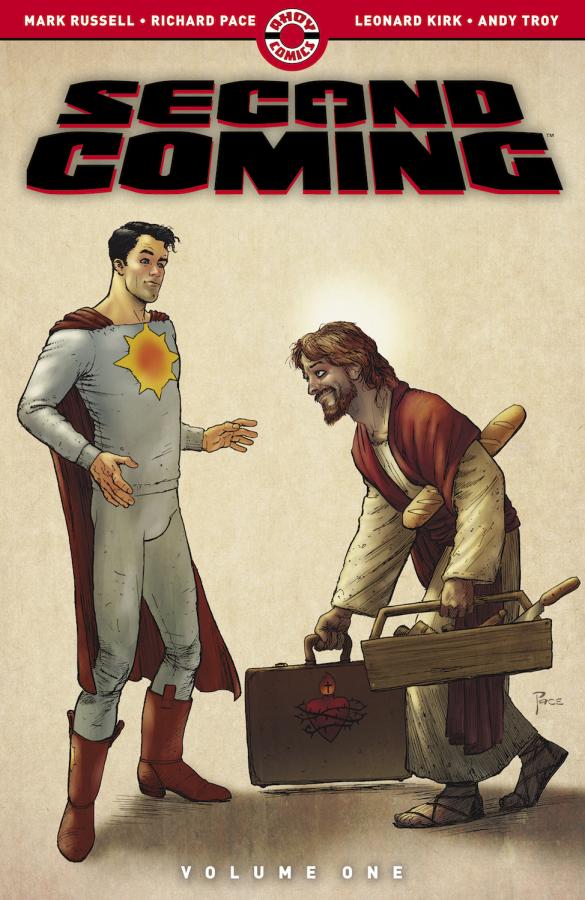 The book everyone’s talking about, by award-winning writer Mark Russell (Wonder Twins, The Flintstones) and artist Richard Pace (Pitt, New Warriors)—now in one volume!  God commands Earth’s mightiest superhero, Sunstar, to accept Jesus as his roommate and teach him how to use power more forcefully. Jesus, shocked at the way humans have twisted his message over two millennia, vows to straighten them out. Collects SECOND COMING #1-6.

“The world's most dangerous comic and the most lovely…Part satire and part philosophical commentary on the state of modern Christianity, the history of its texts, and idea of religious belief in general—all of it hilarious.” -COMICS BEAT

“It's absolutely brilliant.” -FORCES OF GEEK

“SECOND COMING is beautifully drawn and hilariously blunt. It's ribald, cranky, and warm at the same time, and it might be my new favorite thing.” -Gail Simone

“Headlines aside, if you read the book, what you actually find is not a takedown of religion, but, as Russell describes it, an attempt to spread the Gospel.” -THE NEW YORK POST

"While the concept itself is pretty funny, writer Mark Russell takes a sort of Terry Pratchett-esque approach to it, immersing us fully in both Heaven and 'The City' through wickedly funny character interactions...hilarious for sure." -NEWSARAMA