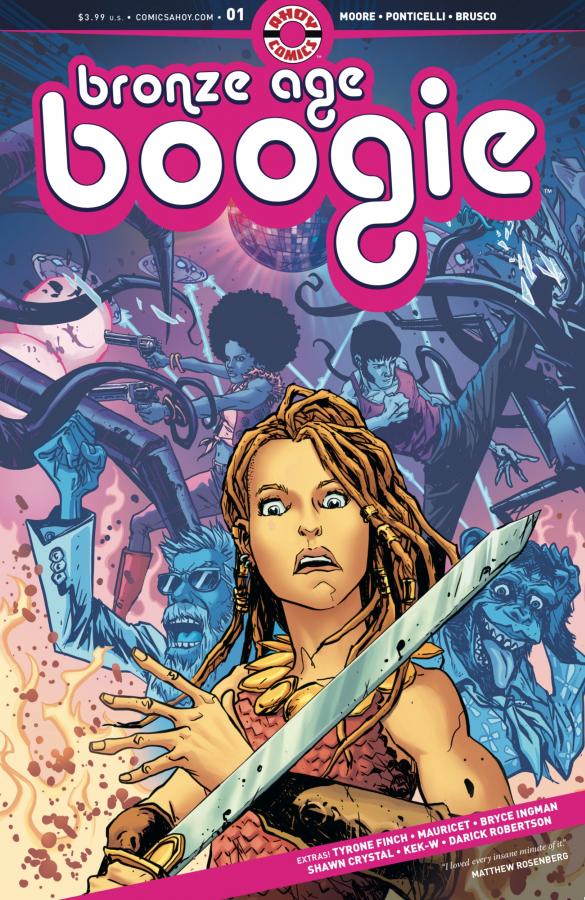 AHOY Wave Two begins! What do you get when you combine all the best-loved comics genres of the 1970s: apes, monsters, Kung Fu, sword-and-sorcery, and cosmic adventure? You get BRONZE AGE BOOGIE, an intense, character-based action-fest with plenty of style! In this collector’s item first issue, young barbarian princess Brita Constantina finds herself battling a Martian invasion—in 1975 AD and BC! Back-feature: Meet MAJOR URSA, the first bear in space. But will he be a hero or a villain? Plus the usual assortment of AHOY extra text stories.

“From its jawdroppingly odd first page to its hilariously insane last, BRONZE AGE BOOGIE sets itself apart from every other comic in the best possible ways. I loved every insane minute of it.” -Matthew Rosenberg (Uncanny X-Men, The Punisher, 4 Kids Walk Into A Bank)

“It’s like skateboarding uncontrollably through 1970s comics with kaleidoscopes strapped to your eyes — but in a good way! I mean, I guess they could have called it SAVAGE SWORD OF THE PLANET OF THE DEADLY HANDS OF THE WORLDS ON THE LOOSE…but BRONZE AGE BOOGIE is, at the very least, shorter. Don’t miss it!” -Kurt Busiek (Marvels, Astro City)