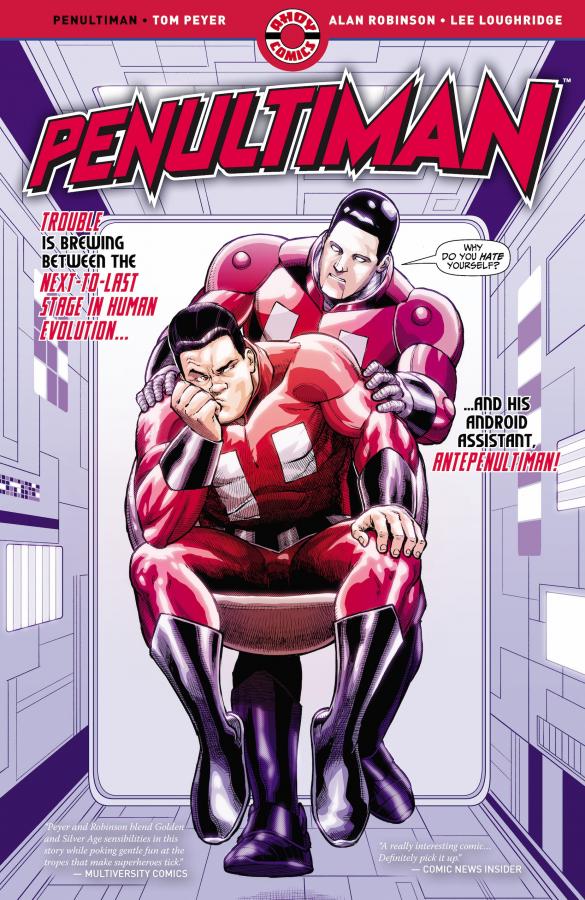 Now in one volume: the modern superhero epic from the minds of Tom Peyer (THE WRONG EARTH) and Alan Robinson (PLANET OF THE NERDS). Penultiman, The Next-To-Last-Stage In Human Evolution, is the greatest, best-looking, and most admired super-hero in the world—so how can he stop hating himself? Only his android understudy, Antepenultiman, may hold the answer.

“We’ve seen characters who represent the ultimate stage of human potential, but I don’t think we’ve met any who are just a little worse than the best,” says writer Tom Peyer. “Imagine the anxiety of being so advanced—only to be outclassed. That’s PENULTIMAN.”

“A fun take on the Captain Marvel-style wholesome superhero, with notes of the mournful loss of family and home we often see in Superman. Except, instead of an 8-year-old boy or an alien sent far from home to avoid a cataclysmic disaster, Penultiman’s exiled from 90,019 BCE to our time to live out his days…Peyer and Robinson blend Golden and Silver-Age sensibilities in this story while poking gentle fun at the tropes that make superheroes tick.” –Multiversity Comics